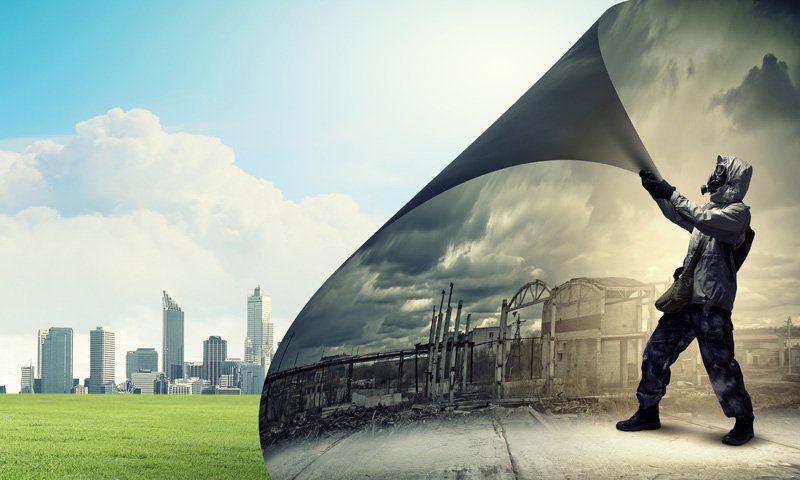 While the rest of America was Black Friday shopping, the federal government released the federal climate change report. Originally planned to be released in December of 2018, this federally mandated report doesn’t deliver good news for the future in terms of climate change. The Fourth National Climate Assessment covers such areas as Communities, Economy, Interconnected Impacts, Actions to Reduce Risks, Water, Health, Ecosystems, Agriculture, and more. As an environmentally friendly energy company, we believe in the importance of understanding the effects of Climate Change, which can largely be contributed to human activity, including greenhouse gases.

This article briefly summarizes the National Climate Assessment, pointing out key points and actionable steps that we can take in order to reduce the dire impacts of climate change.

Across the country, climate change can be felt in many communities, according to the Federal report. We are noticing more frequent and intense weather from coast to coast. The report goes on to say that “Future climate change is expected to further disrupt many areas of life, exacerbating existing challenges to prosperity posed by aging and deteriorating infrastructure, stressed ecosystems, and economic inequality.”

Economic inequality plays a large role for communities and climate change, as lower-income and marginalized individuals don’t have have the capacity to prepare for climate related catastrophes.

Climate change is expected to continue disrupting and damaging current infrastructure models including, property, labor productivity, and the vitality of our communities nationwide, states the 2018 Report. The rising sea levels and increase in temperature have detrimental impacts on natural resources such as agriculture, tourism, fisheries and more-all of which are vulnerable to climate change.

Additionally the higher temperatures may mean the reduction in efficiency of power generation, while increasing the need for energy, which means higher utility bills.

Actionable Step: One way we can fight this is by switching to CHP systems. Combined Heat and Power will efficiently create energy even if the grid goes down. A truly independent and environmentally friendly energy option.

Climate change is impacting the quality and quantity of water available to people across the nation. Because of the changes in precipitation, droughts, heavy downpours, and less snow-pack are occurring. In turn, these events are causing the decline in the quality of surface water. According to the report, “Most U.S. power plants rely on a steady supply of water for cooling, and operations are expected to be affected by changes in water availability and temperature increases. Aging and deteriorating water infrastructure, typically designed for past environmental conditions, compounds the climate risk faced by society.”

Actionable Step: New strategies for water management need to be put in place to help reduce the current and potential risks to water security in this country.

Many of us are aware of the pollution being spilled out into the atmosphere daily. The current decline in air quality across the country is increasing our exposure to food and waterborne diseases, and has increased the amount and severity of allergic illnesses, which include asthma and hay fever. Similarly, the changes in precipitation and temperature are lengthening the pollen season and accelerating indoor air pollutants such as mold. “Communities in the Southeast (United States), for example, are particularly vulnerable to the combined health impacts from vector-borne disease, heat, and flooding. Extreme weather and climate-related events can have lasting mental health consequences in affected communities, particularly if they result in degradation of livelihoods or community relocation.”

Actionable Step: Programs that assist communities and states to prepare for the risks of climate change can help to reduce the risks associated with climate change, such as illnesses, injuries, and/or deaths.

According to the Climate Change report released this last Friday,

“The impacts of climate change on water, land, coastal areas, and other natural resources, as well as infrastructure and related services, are expected to increasingly disrupt Indigenous peoples’ livelihoods and economies, including agriculture and agroforestry, fishing, recreation, and tourism.”

Such impacts from climate change are already beginning to show. In addition to natural resources, agriculture and other natural resources utilized by Indigenous peoples, their health, both physical and mental, is expected to be impacted negatively by climate change. The culture of Indigenous peoples could also be greatly affected. For example, in the event that a community would need to relocate they may find challenges maintaining cultural and community continuity.

Actionable Step: Increase resilience to climate change impacts through a tightly knit social and cultural network. Indigenous peoples are already take steps in order to adapt to the impacts of climate change, some tribes are even looking at developing environmentally friendly energy systems for use of tribal lands.

Climate change is causing the degradation of ecosystems and as a result is increasing wildfire frequency, changes in insect and disease outbreaks, and other stressors which are expected to decrease the ability of U.S. forests’ support of economic activity and recreation. Some of the already visible impacts that climate change has had on ecosystems include the migration of native species alongside the spread of invasive species.

Without a sustained and substantial reduction of greenhouse gases, such issues as extinctions will be unavoidable. Meaning future generations, may interact with the differently in their natural environment than we are used to.

Actionable Step: Controlled Burning to reduce fuel for wildfire, creating safe habitats for species, controlling invasive species are all strategies which are currently being implemented. Along with these strategies, a eco-friendly energy solution that cuts down on greenhouse gas emissions could curb the loss of sea ice and coral reef ecosystems.

It’s easy to see from the above climate change data that a change in temperature and precipitation levels would directly impact crop productivity and livestock, alongside the economy of rural communities. According to the 2018 report, “…overall, yields from major U.S. crops are expected to decline as a consequence of increases in temperatures and possibly changes in water availability, soil erosion, and disease and pest outbreaks. Increases in temperatures during the growing season in the Midwest are projected to be the largest contributing factor to declines in the productivity of U.S. agriculture.”

Overall, climate change could impact the availability of crops and livestock products nationwide-wreaking havoc on those communities, families, and individuals who rely on agriculture to survive.

The rise in temperature also raises concern for heat related illnesses and deaths among livestock.

Actionable Step: Adaptation strategies to decrease the impact of climate change and how it affects agriculture are already available. They include modifying what is produced and adopting new, environmentally friendly energy technology.

As the climate continues to change at its predicted rate, oceanic life will remain at high-risk levels. This causes negative effects to communities who rely on marine ecosystems for their livelihood. On top of these risks, damage to property along the coast due to the rise of sea levels and storms is expected to create increasing financial losses for communities, businesses and individuals alike. Currently the Atlantic and Gulf Coasts, along with the fishing communities of Hawaii are at the greatest risk.

Actionable Step: Shoreline protect and conservation of coastal ecosystems are fundamental in decreasing losses and reducing risks for other parts of the country. Well timed prevention and protection measures are equally important for communities along the coast.

Climate change causes potential risks for season and outdoor economies, especially those economies based and centered around winter recreation, inland water recreation, and coral reef reaction. The people that would most be affected by this are people who live in coastal, rural, and Indigenous areas.

Communities that rely on winter recreation and tourism could also see a decline in activity and tourist revenue due to decreased snowfall.

Actionable Step: According to the Federal Climate Change Report, “Proactive management strategies, such as the use of projected stream temperatures to set priorities for fish conservation, can help reduce disruptions to tourist economies and recreation.

Based off of this report and numerous other accounts of climate change, it’s safe to say that one of the most influential “actionable steps” we can take as a country is to switch to eco-friendly energy systems. By cutting back on a significant portion of our greenhouse gas emission via combined heat and power, we will be able to reduce and maybe one day eliminate the rapidly increasing climate change along with its detrimental and life threatening effects. For more information how how you can get your project running off of environmentally friendly energy, contact your trusted energy supplier Highland West Energy.