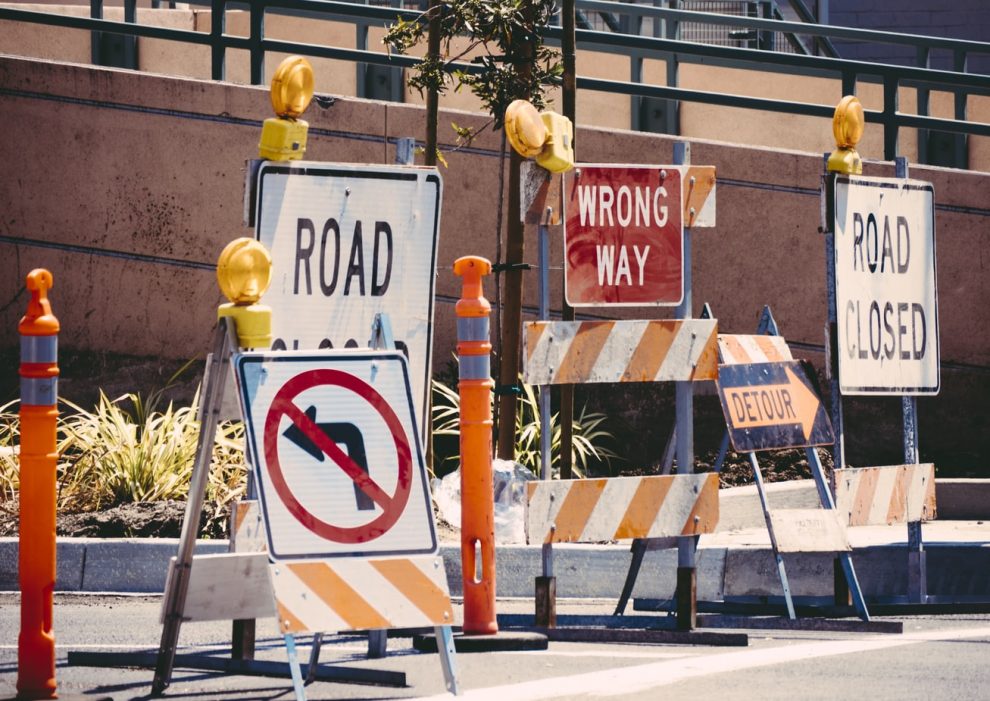 Traffic signs play a huge role in the safety of those driving through our work zones. They do their best to provide a safe and structured passage. Despite our best efforts, the flow of traffic will always need to be changes to the flow of traffic at times. There are many different methods for controlling these occurrences, and just as many different styles of  portable traffic signs to keep things on track. Just what options are available for portable traffic signs? And when are they best used?

These simple signs are often made of highly reflective polyester materials attached to a single pole. The pole is really just part of a supportive tripod that is spring loaded. This allows the sign to slightly blow with the wind instead of blowing completely over. These signs are most often used on long stretches of highway where the wide open areas lead to the risk of very high winds. If warning signs were to blow over, it can lead to incredibly dangerous situations for those driving through the work zones. This danger is caused by lack of knowledge of the upcoming terrain, or simply from loose signs flying about the roadway. Such signs often have to be custom built by suppliers.

These styles of signs operate best when they are used as warning and regulatory signs. In other words, they do their best work as a washing sign alerting drivers to upcoming conditions. These conditions can range anywhere from uneven lanes, and steel plates ahead, or all the way down to a flat out road closure. They also are well used as a temporary regulatory sign. A regulatory sign is one that sets the speed limits, determines parking spots and much more. The windbreaker variety is most often used as a speed limit sign however!

The folding barricade is another commonly used style of portable traffic signs. These barricades are cheap to purchase and produce, making them a favorite of many contractors. Often they can even produce the folding barricade themselves! They are heavily regulated however, which makes their use far less widespread than it would be otherwise. Any Signage attached to a folding barricade must be produced by a licenced manufacturer. Furthermore, these signs are truly only allowed for work on roads that have lower speed limits.

The folding barricade style of portable traffic sign works exceptionally well at indicating closed sidewalks, and occasionally redirecting traffic around bustling downtown areas. Also known as a type 1 barricade these simple folding barricades are made up of one simple strip along the top of the barricade with reflective material on it. Arrows can be attached to them, or any form of signage needed for your project. Their ideal setting is any project in the middle of the city!

Lastly, but certainly not least comes the advanced Itraffic system. This is a system using a combination of radar guns and wireless communication to both monitor the traffic. They read the speed of the oncoming traffic and can adjust their messaging as needed. This system is not anywhere near as easy to move as the windbreakers or the folding barricades. However, it will still travel just about anywhere as long as you have a truck or crew to pull it. These boards can be as simple as a lit arrow board, or down to an advanced messaging system that is easily changed to alert drivers to the upcoming dangers.

The Itraffic System can be used just about anywhere, but it is most commonly used for large jobs along interstates and major highways. Their large size, and easy visibility make it a perfect candidate for jobs near roads with high rates of speed. Another alternate use for these systems is the announcement of future events. Be it planned construction, or simply an event being put on by the city, the easy visibility helps many to be informed on the future upcomings of the town. Typically renting the system is the best option for most contractors. Purchasing a system like this can be quite expensive. It simply isn’t justifiable for their occasional use. But you can rent them from many places for quite a reasonable price.

SolidWheel.com > General > What Kinds Of Portable Traffic Signs Are There?